We arrived safely in Beirut. Hectic week at work. Will post more shortly. Found an empty box of Sombrero Negro tequila outside our hotel, now at a cafe called Tequila...coincidence? First time out of Egypt...hells yeah!!!  Will post something real soon.
xoxo
Bob y Ana
Posted by Bob Rob Medina at 1:29 AM No comments:

The Warden Message, God, and Soccer

This warden message is being issued to alert U.S. citizens residing and traveling in Egypt that on Saturday, November 14, 2009, at approximately 7:30 p.m., a soccer match will take place between the Egyptian and Algerian national teams. The game will be held at the Cairo Stadium in Nasr City. This event will negatively impact traffic in the surrounding areas and will include large crowds and heightened passions.

On the way down to Coptic Cairo this past Saturday we were right outside of Giza when I made the suggestion to Ana that we should stay and try to get tickets to the Egypt and Algeria game. Right then I knew I just uttered the wrong statement with her non-response and glare. I thought it was a good idea. The organizer of the trip chimed in breaking the awkward silence and mentioned that the game has been sold out and it would be impossible to get tickets. I told her we could go to the VIP door and flash our passports and say that we are guests from the embassy and forgot our invitation letters back at the hotel. That got a couple of good chuckles…”hey guys, I’m serious!” was all I could offer before officially being dismissed.

Our first stop of the morning was Saint Samaan Monastery which has a church built into a side of a hill quasi amphitheater style. Once we turned off the major road we went through an economically depressed neighborhood, most of the buildings were inhibited by piles garbage and children surrounded by swarms of flies picking out the recyclable material in the darkened doorways. As our van navigated through the narrow and crowded dirt path it became clear that once the garbage had been sorted out a truck or a donkey pulling a cart moved the recycled material to its’ proper location. There were buildings designated for tin foil, nylon sacks, clarified butter tins, and about everything else you could think of. The material is then bundled and large trucks from the outside enter the neighborhood to collect and haul it off. We followed the path up the hill and went through a short underpass and just like that the hazy gray sun of Cairo was shinning down on us. Somehow the transition from poverty and darkened streets to light and open space was undeniably surreal. 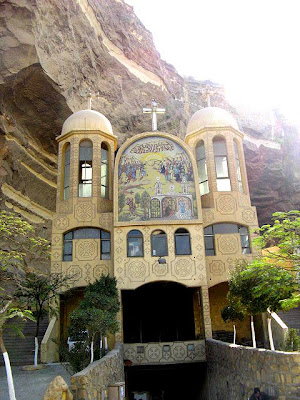 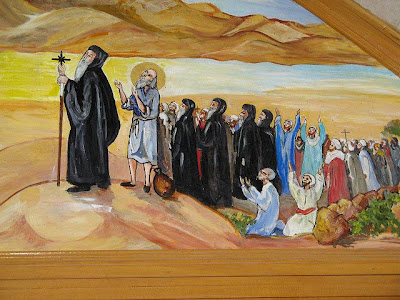 Our next stop was Coptic Cairo, which is connected to old Cairo, the hub of Christianity in Egypt. In Coptic Cairo you will find The Hanging Church, The Monastery and Church of Saint George, and several other active churches including a Coptic Museum and the highly fortified Ben Ezra Synagogue. The most interesting of the batch was the basement of The Church of St. George, which is maintained by the resident nuns. One of the rooms has the original iron collar and chain that was used to torture St. George, those willing are allowed to place the collar around their neck and wrap themselves in the chain to seek a blessing from the saint. The ritual ends with the kissing of both the collar and chain. Ana and I both participated in the ritual and in retrospect I still feel unsettled by the experience. 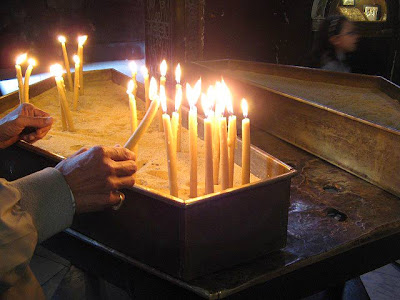 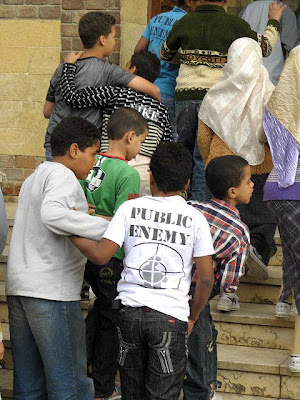 Public Enemy is popular with Grade 3 boys..."Fight The Power" 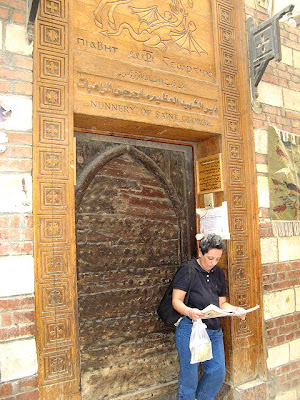 Our Coptic Cairo Organizer hangin' at the Nunnery

By the time we left Cairo the city was already filling up fans and was in full soccer mode. Bodies were sticking out of the cars, giant flags covered back windows of vehicles, vendors on the streets hocking flags and Egyptian Cat In The Hat hats, kids running amok with flag capes…it looked like it was going to be a good one, lively to say the least. In a couple of emails I told friends about the game casually mentioning if Egypt wins there will be chaos in the streets and if they lose there will be chaos in the streets….

I thought I knew about sports fanaticism growing up in Denver following the Broncos and the whole concept of the fans being the “twelfth man.” Egypt ups the ante in ways you cannot imagine. Here the concept of a national soccer match occurs on many different levels; there is the obvious one on the field, the one in the stands, and the one on the streets. When the Algerian team arrived in Cairo they were greeted with stones causing injury to a couple of their players, however the consensus of the Egyptian population are crying foul claiming that the players were never hurt, that the event was just a dirty trick to get the game moved out of Cairo to a neutral location. The driver of the team’s bus even stated there was no broken glass on the inside of the bus and there are medical experts claiming that the bandage on the player’s head was as phony as a three-dollar bill. Following the match the fans in the stadium weren’t released until the Algerian team safely departed-under the security of a heavy motorcade.

When we returned back to Alexandria, Ana and I were dropped off at a mall to meet up with a couple of Egyptian co-workers (Abeer and Mai) to watch the match at one of the cafes or in our case a makeshift one. Most legit cafes and restaurants were already sold out. We found a pizza joint on the top floor with about 150 plus chair crammed in front of their two wall-mounted televisions and at 20 EGP a head it was quite the deal. The sound on the TV was cranked at full volume which translated into a loud and angry buzzing static, patrons compulsively and nervously puffed on cigarettes, a clown banged on a drum, there was shouting, flag waving, and chanting…it was pretty tame compared to outside. Egypt scored a goal within the first few minutes and the country erupted into a deafening frenzy. Egypt needed to beat Algeria by three goals to qualify for the World Cup OR two goals to force a tie-breaker which meant another match against Algeria; basically a simple 1-0 win wasn’t going to amount to much. Any hope of Egypt scoring another goal dwindled as the score remained 1-0 with only a couple minutes remaining. Disappointed and disillusioned, fans abandoned their chairs in hordes. It seemed only a miracle could save the night and just as the prospect of scoring any sort of goal weeded out the last of the naysayers, it happened…a second coming of sorts, the parting of the Red Sea version 2.0. GOAL! GOAL! GOAL! Or as they say back home Goooooooooooooaaaaaaalllll! The handful remaining of us faithful fans made more than enough noise for the departed; chairs were hit against the tiled floor, babies tossed in the air, there was hugging, kissing, dancing, banging…it was a symphony of uninhibited and unapologetic excitement and celebration. The nation was elated and that was just at the end of the match as the night was still young…

There is more to the story that entails unruly pirate boys…the tie-breaker match will be played in Sudan on Wednesday only then will it be decided who will go to the World Cup in South Africa in 2010. 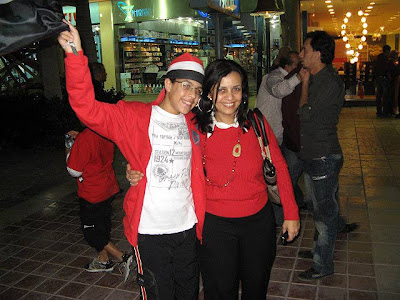 Abeer and her son proudly cheer Masr
Posted by Bob Rob Medina at 9:21 AM No comments:

In my last post I had mentioned that Ana went to a pre-Halloween party wearing face paint looking like a calavera (skeleton) and received much local folk attention from doing so. I would wager that most Egyptians in our neighborhood are unaware of the holiday thus making me half tempted to paint my face to venture out and buy vegetables or a rotisserie chicken from down the street. I have shopped this idea around to a couple of other seasoned teachers and most feared that I might be chased with the infamous homemade nail in the 2” x 4” club or at the very least have people shout not-so-friendly Arabic phrases that involve goats, sheep, and/or donkeys at me. It might be a good social experiment in the future once I get a little more nerve to seek a Darwin Award, for now I’m keeping the idea on the backburner. 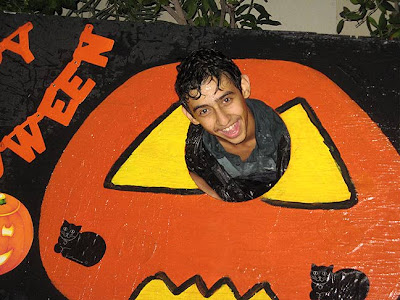 Abdo getting hit in the face with a heavy wet sponge 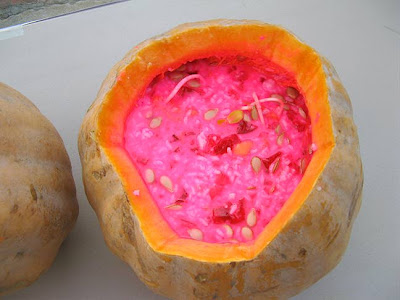 The key is hidden inside 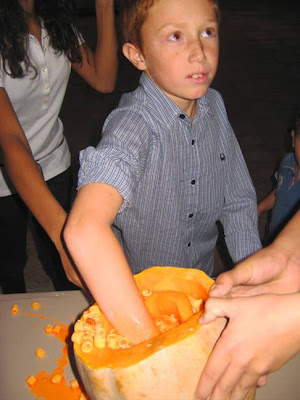 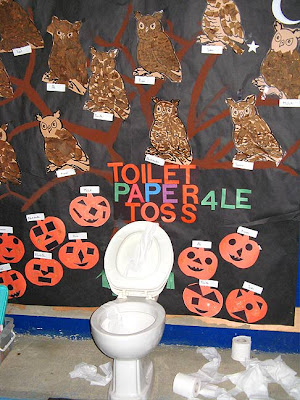 Don't try this at home

Our school had a Halloween Carnival under the moniker “Fall Festival” marking a 14-hour day at the office. Thankfully it was a teacher workday to get report cards completed which left the remainder of the afternoon and evening dedicated to getting people and the school grounds wet and messy. The top-billed events included a haunted house and several water themed booths such as a wet sponge in the face game, dropping water balloons on people’s heads from two flights up a fire escape, and sink the teacher/student game (a plank tied on to a giant inner tube that floated in the middle of a swimming pool where the participant paid for chances to throw large rubber balls at the person standing on the plank with objective of hitting them with the ball and making them fall into the pool). Other games include throwing rolls of toilet paper into a toilet from a distance, climbing a tree to ring a bell without falling off. 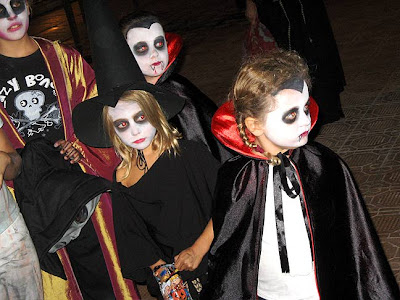 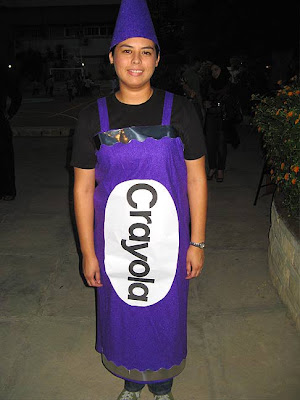 Our booth was physically on the tame side. Another teacher and I co-teach an advisory class and our students wanted our offer “shave the balloon” and “find the key.”  Shaving the balloon involved putting shaving cream on a balloon and kids using a razor to shave it. It was remarkable on how few balloons popped. Finding the key game was a little more intense, especially for those with texture issues and/or a weak stomach.  Basically I carved out four pumpkins and filled them with foodstuffs that started to decompose. Initially the games were unpopular, but as the night progressed, we had quite a few customer and a handful of returning ones, a few who I can see working in a field relating to biology or the local morgue. To my surprise there was fortune-telling booth comprised of reading cards and coffee grinds. This is religiously forbidden in Islam, which is known as 3aram (the 3 is pronounced ahh, making it ahh-rom). What can I say, who doesn’t love a sinner. The night ended with a high school dance in which I heard about a dozen people attended. 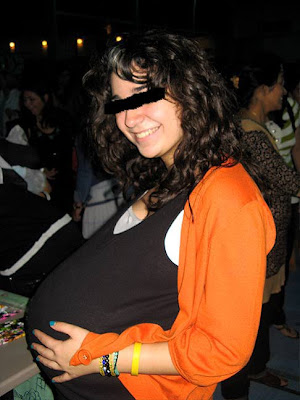 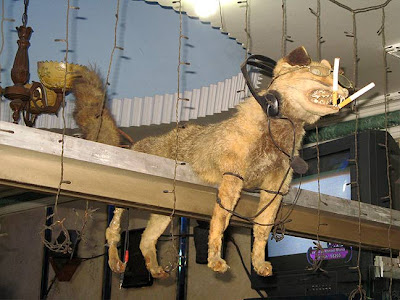 Not really Halloween related, but we saw this inside a coffee shop, not your regular Starbucks.
On a side note, several of you have inquired about sending Ana and I care packages. Thank you for the thoughtfulness, but please don’t. First it will cost you a ton of money. Secondly, customs will open the package (and they like snacks as much as we do). Finally, we have to pay an outrageous import/customs fee for half-eaten box of Pop-Tarts. We have also sent out lots of letters and postcards, some people have received them while some remain MIA. Let us know if you haven’t received anything from us.
Posted by Bob Rob Medina at 9:27 AM 3 comments: