I guess it is worth jotting a few lines about my experiences with barbers in Alexandria now that I have a few sessions under my belt. The former IT/tech teacher Mark kept an extensive blog about his trials living here and I found his entries regarding full service haircut something worth investigating. I have to admit that my last outing to the barber shop was over the top, the grand finale, the "I don’t think I ever want a haircut again" kind of experience. Before I go any further, I should mention a few words about the runner up. 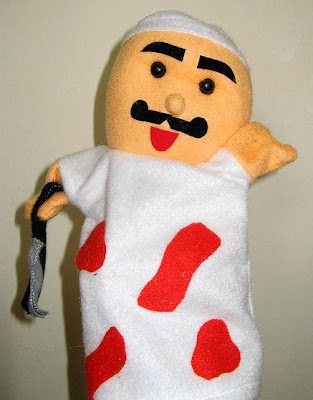 Butcher puppet with blood and axe
Second Place was my christening, my introduction to Egyptian barbers. The nondescript shop was tucked in the middle of a long street block, there was no sign just an empty chair in storefront. Since my afternoon was free and I had been holding out for two months, I figured why the hell not. When I saw the proprietor engrossed in his soap opera that should have been my cue to keep on walking. 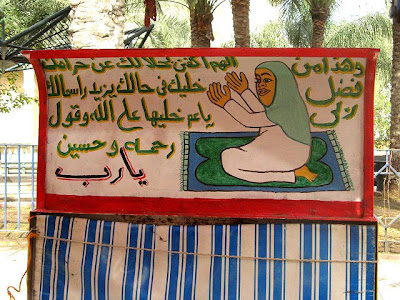 Girl praying painting
Initially everything was going smoothly until the heavy drama on the TV set above my chair interrupted the flow of his scissors. There were long pauses between snips; commercials were a godsend. When he started talking back to the characters, I knew I was in for the long haul. Additionally there was no blow dryer or device to brush off the cut hairs that lingered on my face and neck; he resorted to removing them by using his stale tea breath to blow them off. Afterwards he shaved my face with a straight razor minus cream, the cuts eventually healed. I also learned that conditioner substitutes for hair gel. 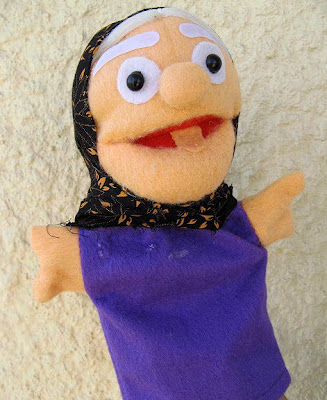 Nice old lady puppet
...and the winner is: For my last haircut outing I was warned well in advanced by other teachers of what I was potentially getting myself into, I blame curiosity. The salon is located right down the block from school and the eager and friendly owner has a knack for prying on lone foreigners. On more than a dozen occasions he had asked me to come into his shop. The session was initially pleasant as he told me stories about living in Dubai and even asked me to bring him back some smocks from when I go there in April. Once finished he wanted to wash my hair which is standard for me. I followed him into the dark back room and he closed the curtains as I sat on a chair. Instead of leaning back into the sink I was asked to lean forward and that is when he started to massage my shoulders then his hands slowly moved down my back. He put one hand on my chest then with his other hand still on my back and stared doing something that I can only describe as a variation of the Heimlich maneuver. He got a couple of hearty grunts out of me as he explained it as something he learned at a hotel in Dubai. It wasn’t so much creepy as it was bizarre and for the life of me I had no idea what he was attempting to do. Thankfully a couple of customers walked in and that spooked him into pulling those curtains open and turning on the water to wash my hair. After overcharging me he said, “see you next time.” Now I just run past his shop when I have to walk down the street. 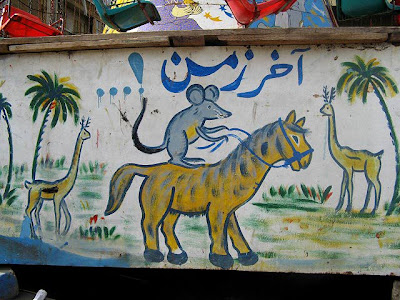 Rat riding horse with antler giraffes painting
Going to a movie theater in Alex is plagued by Chatty Cathies of all sorts. Cell phone offenders are the major culprit, most have no qualms answering their phones and having a conversation during a film. We like it when there’s unedited kissing scenes, teens typically shout an encouraging “yes” in Arabic. Ana and I had seen the 3D versions of both Avatar and Alice and let me tell you there is nothing more remarkable than a scarved or veiled girl wearing 3D glasses, in my book that’s worth the price of admission…way better than seeing a nun bowl. 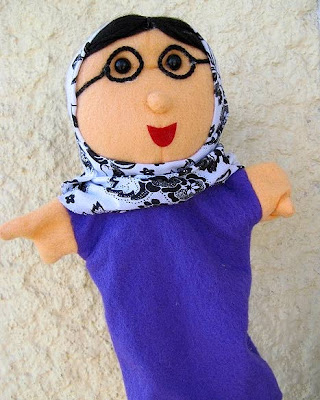 Broken glasses puppet
It has been confirmed, there is live rock music in Alex, or I should say death metal in a symphony hall to be exact. They call them headbanger concerts and we went to go see one. There was moshing complete with black clothing and there were veiled girls rocking out; you can’t stop the rock. I was disappointed that one band had a drum machine and sound checked for thirty minutes only to play a twenty-minute set b/c they didn’t program enough songs. Que lastima! We left when the next band played the same tune three times in a row! 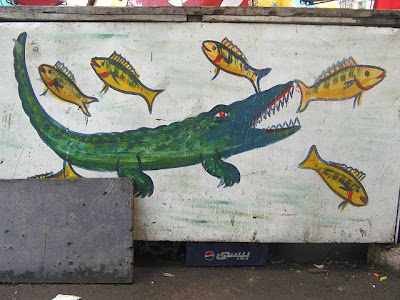 Hungry gator painting
You like the cultural puppets don’t you…better pictures next time. 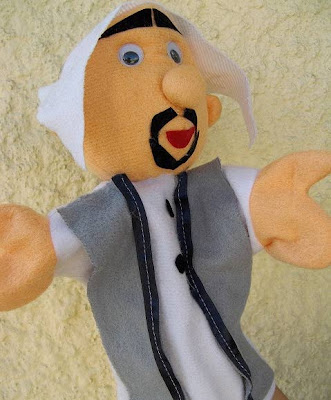