For the record, Ana and I had willingly spent our Eid holiday trip deep in “the blue company” (aka Pepsi) territory. If my brother still worked for Coke, I suppose he’d be calling me Judas.

Eid ul-Fitr is a three-day Muslim holiday marking the end of Ramadan; to us foreign hire teachers this translates to “five-day vacation.” Traditionally, most of the staff seizes this opportunity to escape Alex and explore the amazing sights around Egypt. In my case, if it hadn’t been for the mighty Craigslist, a good chunk of us might have been stranded inside our compound. 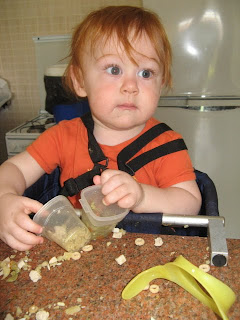 The consensus among the group (5 couples and Saint Malcolm) was we all wanted “quiet” and “beach.” I did a little research and found a lady who was renting a villa on the Red Sea, an hour outside of Cairo in an area called Ain Sukhna (lit. hot springs). Ain Sukhna isn’t really a town per say, it is several independent weekend home/resort/condo developments centered around a KFC and Pizza Hut on the way to the Suez Canal. The complex we stayed in was called Wadi Degla and most of us agreed that it was a Coptic community. The Muslims were definitely the minority…as to say we saw hair and bikinis. 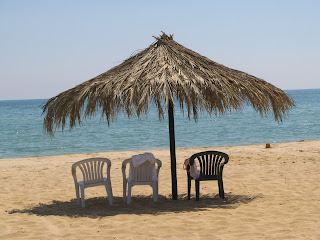 One of the teachers summed-up the pains of our daily routine by professing, “we got up, ate breakfast, went to the pool, ate lunch, went to the beach, took a nap, ate dinner, went to the pool, had a beer, and went to bed.” That’s all folks. In other words, no efforts were made to better ourselves or humanity. 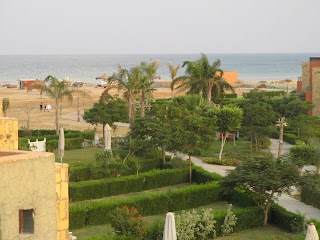 View from our villa

I would like to note that while kicking sand around with my feet Jesus appeared…sort of. It was an image of Christ on a tile from a broken bracelet buried in the sand at the Red Sea, coincidence? The water was turquoise, clear, and extra salty in addition to being home to tiny crabs suffering from a serious case of Napoleon Complex as most went out of their way to spar with all available toes. A member of our group found a sand dollar the size of personal pan pizza (see…I told you that were locked in a Pepsi controlled community) and his wife discovered a KFC bag in her underwater expedition near the boating dock. 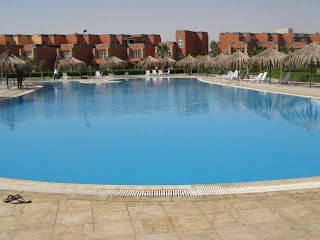 Pool that had a sign banning nannies from swimming

The fun in the sun ended when we piled in van back to Alex. On the drive back home we encountered a toy pistol totin' walad (little boy) and his younger brother situated in the back of a pick-up truck with the family goats. The boys first smiled and waved then pretended to shoot at us while dad and the three amigos puffed away on cigarettes in the cab. It was a Kodak moment. We arrived home a little more cooked on the outside. When all was said and done, we figured our adventure set us back about the cost of taking a family of four out to the ballgame including parking, hotdogs, and Cokes…maybe not that expensive. 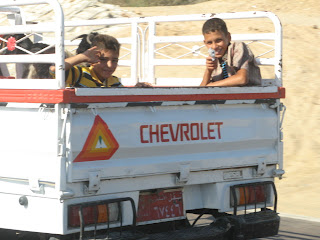 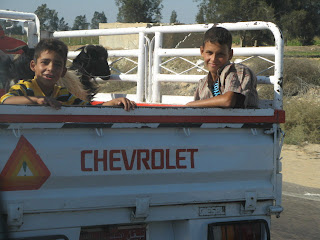 just chillin' with the goats