The Trinidad I once knew

I used to think of Trinidad as my second home, it was certainly the area where my parents were born and raised. It wasn’t unusual for my dad to get home from work around the time I got home from school on a Friday afternoon and load up the car and drive three hours to the edge of southern Colorado at least one weekend a month. I know the route down I-25 like the back of my hand. Here it goes like a run-on sentence.

One you hit Castle Rock you’re really out of the Denver area. Monument Hill is an area you don’t want to be when there is snow and ice, but boasts an amazing view when driving down into Colorado Springs. There are always gliders and single prop Cessna type planes pulling them along in front of the Air Force Academy stadium at the base of the Rockies. Painted signs to North Pole Santa’s Workshop and Garden of the Gods line the outskirts of Colorado Springs and I have yet to visit either of them. Towering over the Springs sits Pikes Peak. If you are lucky enough you might get a chance to see tanks and Army troops on maneuvers behind the barbed wired fence of Fort Carson on the way out of town. The green and lush landscape fades into a dry terrain as you approach the iconic smoke stacks of the distant Pueblo. And each time I pass through there, I make a promise to get off the interstate and explore it one day. The climb past Colorado City is a view of Fisher’s Peak some 50 odd miles south. The 300 foot Huerfano mountain (actually butte) is a true orphan of the flat landscape in comparison to the majestic Spanish Peaks to its’ west. Walsenburg is a town that has seen better days, and if you blink you will miss the turnoff. Lathrop State Park and its’ two lakes are still there as far as I know. It was my least favorite campsites growing up because it was typically hot, loaded with desert brush and snakes. Seeing the exit for Aguilar meant that Trinidad was just around the corner. My Dad and Uncle Cheech would say that some of the best goat cheese came from there. You can’t see the town from the highway and I have never been there so I am unable to vouch for its’ existence. Around to the bend between Trinidad and Aguilar is the ghost town of Ludlow sadly known as the site of the 1914 massacre of 19 men, women, and mostly children by the Colorado National Guard during a coal miners strike. My Uncle Lon and others claim that you can see ghosts of the mining camps on fire while driving at night. Just a little under three hours later you have arrived in Trinidad.

Below are photos of a once thriving mining town now mostly known as the sex change capital of the world. What I can say about the town won’t do it justice but in the same breath I could write a book about it. I felt an overwhelming sense of nostalgia when I was there. I have many fond memories of family tied to Trinidad and it seems that time and change have robbed me of that. In loving memory of my mom (1932-2009). 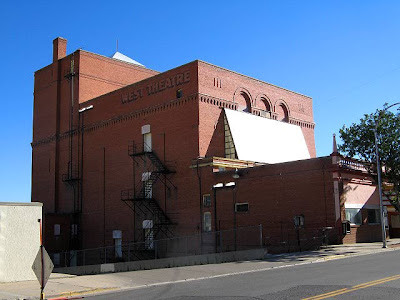 The Trinidad Theatre. My cousin Linda and I would be dropped off here when our parents would go out for the evening. Movies still run, I believe there is one show every evening at 7:30. 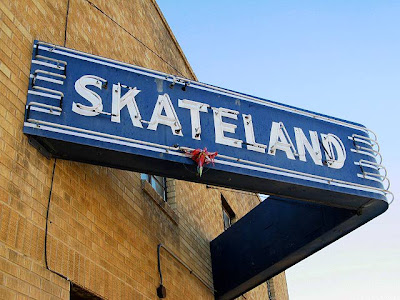 The building still stand and the sign is intact, but I'm not sure if the doors are still open. 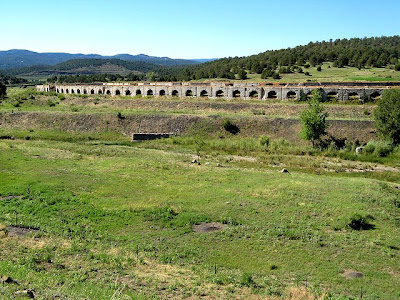 The 36 mile rote to Monument Lake is better known as "up the river" meaning driving along the route 12 along the Purgatorie River. You will encounter the small towns of Cokedale, Valdez, Segundo, and Weston. Cokedale is a small town about 7 miles west of Trinidad known for its' rows of coke ovens. According to the census there are less than 200 inhabitants that occupy the disappearing town. The church in Valdez where my parents were married. 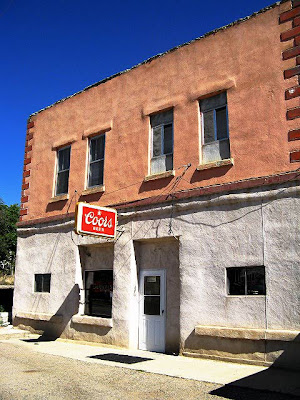 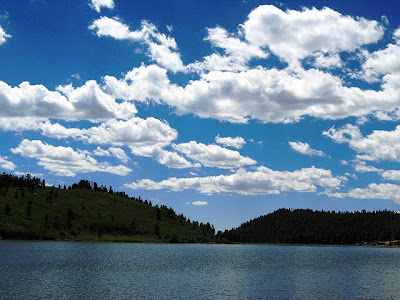 Monument Lake lies just after Stonewall, and yes there are natural walls of stones. My dad told me about a mining camp a mile or two away from the lake his father worked and lived at. We spent the afternoon feeding the fish various types of bait while getting farmer's tans and eating lunch meat from Walmart. The lake has always been a favorite of mine. Growing up, Uncle Cheech would sit me in his lap and let me drive his green van on the loose gravel road that wound around the lake. He also explained why he wore his straw cowboy hat over his face when he took a nap..."so butterflies don't poop in your mouth!" Sound advice to live by. 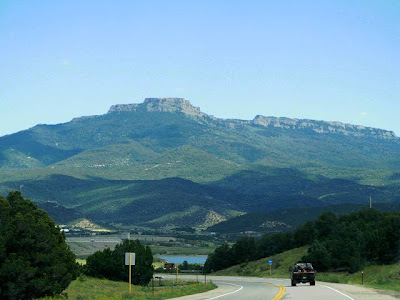 Fisher's Peak. My dad told me stories of him, his brother, and friends climbing it when they were young. Each time I hear the story I am amazed, thinking how and the hell did they do that without getting eaten by a bear? 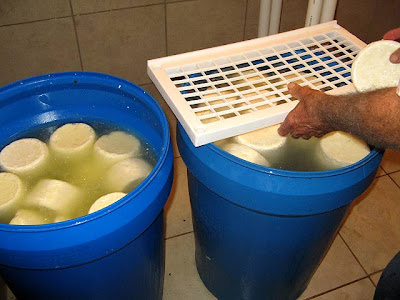 A trip to Southern Colorado isn't complete without picking up some goat cheese. There are two ways to get it:
a) At the market when it is delivered, it will sell out in hours.
b) Call one of the two remaining goat dairies and place an order for pick-up or delivery. 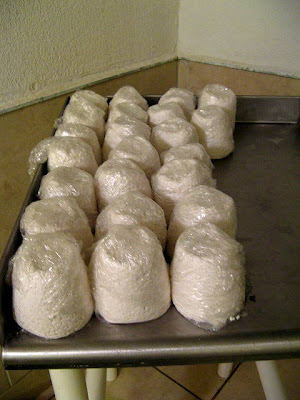 There are two types of cheese the dairies make. A hard cheddar like wheel (approx. 1-2 pound) with a salted outside and a ricotta. 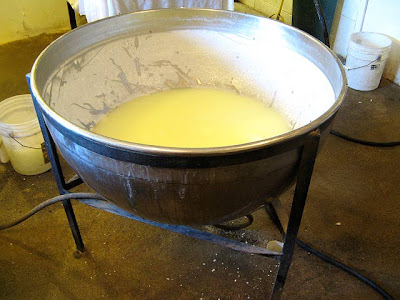 The two remaining dairies are located in Hoehne about 10 miles east of Trinidad are Zubal and Philpott. I did some research on goat cheese from the region and learned that used to be "dozens" of goat dairies before government health regulations forced out these family owned operations. To read more click here to read Teresa Farney's article A Dying Breed. 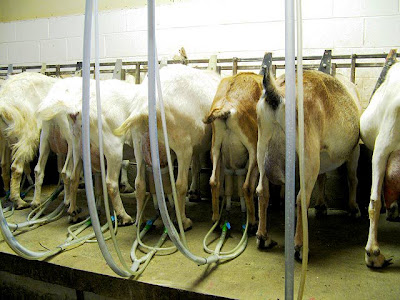 The goats getting milked at Philpott. 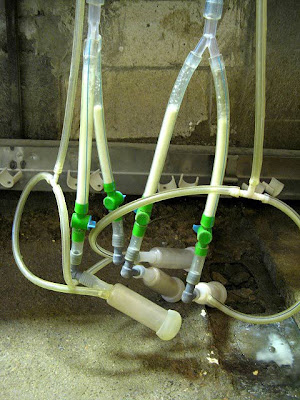 Equipment (milkers) that attach to the utters. 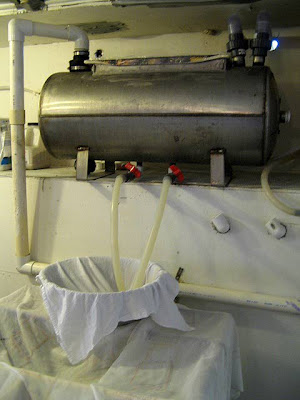 The goats are in the other room with the attached milkers and the milk is pumped through the tubes into the above tank then the milk is filtered with the cheese cloth. 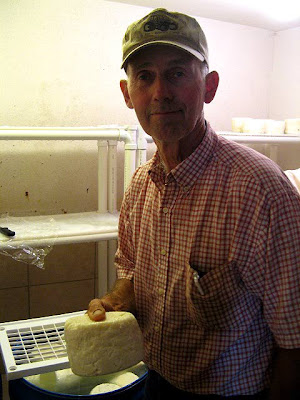 Owner Paul Philpott getting our cheese ready. If you would like to try some of this delicious goat cheese you can call Philpott or Zubal directly and they will Fed Ex the goods to you. When Ana and I ordered a wheel from Doris Zubal a few years ago they sent us a cool plastic key chain and a business card with a goat on it. Below is contact info:
Philpott Goat Dairy (719) 846-3059
Zubal Goat Dairy (719) 846-6138 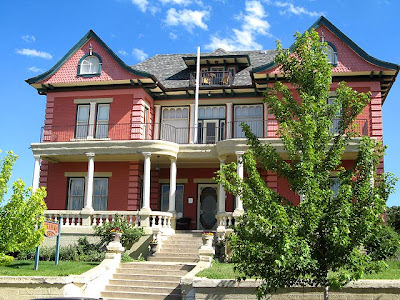 At one time Trinidad boasted the most bars per capita in Colorado-meaning that coal miners worked up quite a thirst...it looked like there were less than 20 remaining in a town of around 9,000 residents. 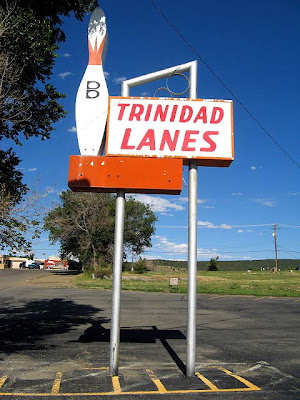 The green bowling alley building and sign are still there. 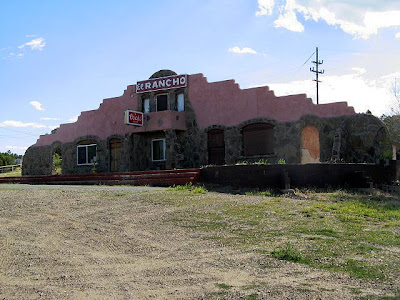 My dad told me a story about this building when it was under a different name back in the late 40's. My dad, his brother, and a friend went to have a beer one evening and the owner had booked a band and advertised it all over town. The band called and cancelled hours before they were suppose to arrive. The owner had asked my dad and company if the knew of any bands who could take their spot. My uncle mentioned that they were a group and would play for drinks. The owner agreed and filled their glasses. My uncle suggested after tipping back a couple that they should go home and get their instruments. At this point in the story I interrupted my dad and asked him if any of them played any instrument? He replied that they didn't even own a radio. 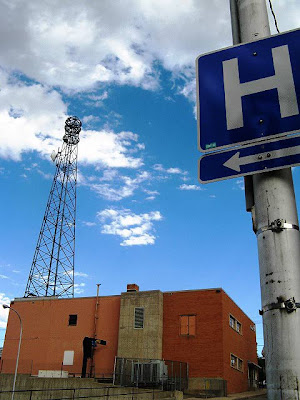 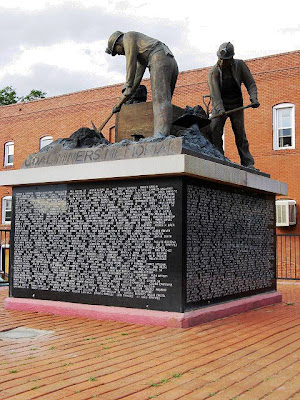 Southern Colorado Coal Miners Memorial located in the center of town on Main Street. The bronze sculpture has life size figures and the names of past men and women miners etched at the base. Opposite side of the mall stands a giant sculpture of a canary enclosed in a cage honoring the bird that warned miners thus saving many lives. 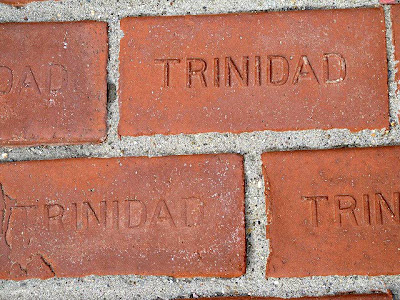 One of the most remarkable aspects about the town are the red Trinidad brick streets. 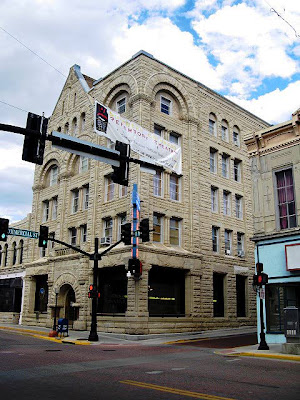 To think that this is main street at five in the afternoon. 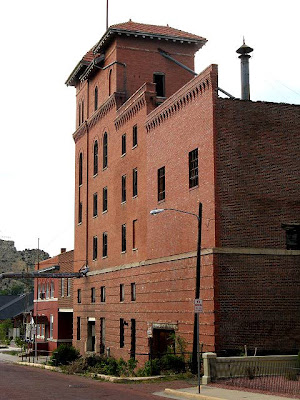 One of the many brick buildings. 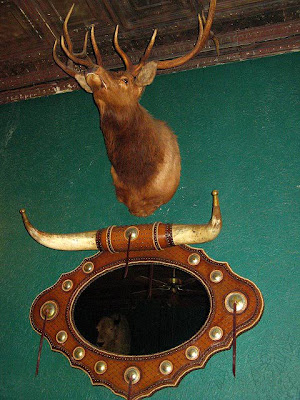 Black Jack's Saloon and Steakhouse. The food was tasty, the decor was amazingly tacky, and any place that lets you toss your peanut shells on the floor is alright with me. In keeping theme with the rest of the town, it shuts down early. If you show up after 8pm they won't let you in so you might want to head on over to the Trinidad Diner which serves until 9pm. After that your only hope is Sonics. 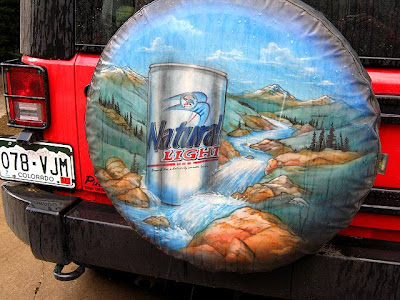 When you have a favorite been why not let the whole world know. 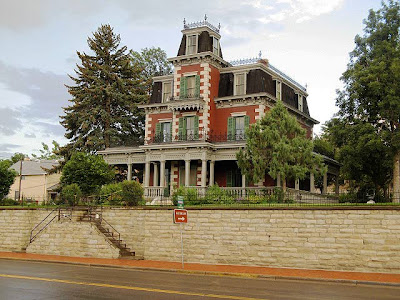 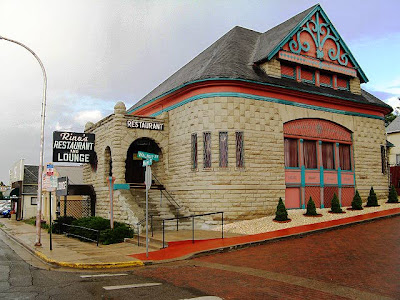 Rinos Italian Restaurant. I had never been here but I know the building well and after learning a thing or two of what goes on inside such as the singing waiters covering songs from Bocelli to Elvis make this a future destination. 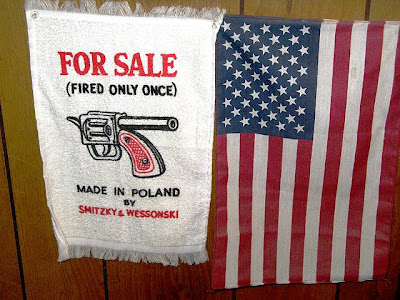 Inside the office of the second hotel we stayed at. The place is run by a cool biker couple. 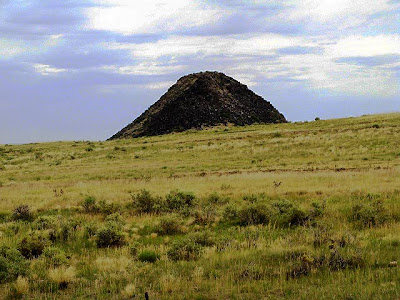 Huerfano Mountain (butte) in all of its' glory.
Posted by Bob Rob Medina at 5:46 PM